Create an Account - Increase your productivity, customize your experience, and engage in information you care about.

The uniform patch of the Canton, Massachusetts Police Department is proudly worn on the left shoulder of each officer, as it is closest to the heart. It is representative of both the historical attributes of the community the officers protect and serve, as well as the symbolic legacy of the agency.

The Town of Canton, Massachusetts was incorporated in 1797, but the police department was not formally established until 1875. Since then, over a hundred men and women have proudly served within the ranks of this agency. Although a majority never wore this emblem, as it only became standard in October of 2006, the symbolic legacy described herein, is built upon the foundation of those who have served before!

The scene on the patch has three distinct images, the first being a silhouette of Paul Revere, lantern in hand, riding a horse upon a copper roll. This is significant from a historical perspective, because Paul Revere owned and operated the first “Copper Rolling Mill” in the United States, which was located in this community. Symbolically, this “gleaming figure in the night” is illuminating the path of good over evil. 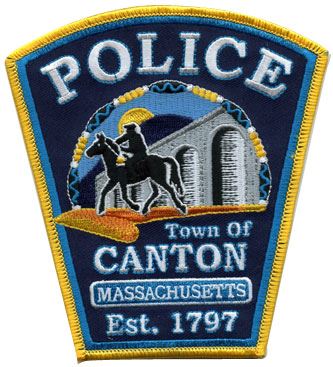 The “Viaduct” is the bridge that represents the only rail connection to the northeast and the City of Boston for people from across the nation. It is one of only two hollow stone bridges in the world, the second being in Russia. This fact is important in itself, because it underscores the importance of connection and partnership between the community and the officers who protect and serve it.

The distant image of historical “Blue Hills” in the background, coupled with the decorative native bead design outlining the overall scene, pays homage to the original settlers of Canton, the Native American “Ponkapoag” tribe. The color of the beads is significant, the gold representing excellence and the blue line separating the black bead is a symbolic tribute to officers who have died in the line of duty.